My tour of duty is done. I'm heading home. 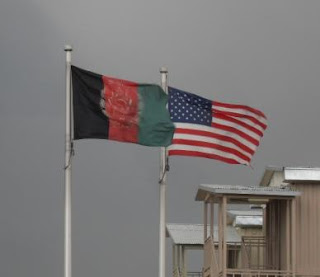 Today is a significant milestone in my deployment. It was 180 days ago today I arrived in Afghanistan.

I did not give it much thought until I was sitting outside my room this morning and soaked in what going on around me. Fighter aircraft and helicopters were taking off on combat missions; a unit was conducting permission checks on their weapons and vehicles before heading out to some village to the north of here; and there was construction vehicles working on a new cargo pad.

It was the construction site that drew my attention. They were prepping the same area where our original living quarters use to stand when we first arrived in country. Now all that has changed.

And I asked myself, “what has changed in my life over the past 180 days?”

I can honestly say I am not the same person I was when I got here on 4 Nov 2009. Spiritually, physically, and mentally I have changed.

Spiritually, well this is new territory for me. I was raised Catholic, but did not really give it much thought. For reasons unknown to me, I stopped going to church shortly before entering the military in 1995.

It was not until 13 Oct 09 that I realized how much I needed God back in my life. That was the day I was completely broken down by life’s circumstances. Since then, and with continual support and prayers of some close friends and family, my faith has grown by the day.

Attending ChapelNext on Sundays and Bible studies on Thurs have kept me grounded. Through God, my perspective on life has changed.

Physically, I have learned to push the limits of my body (x3 surgeries on my lower back--it's fused L4 – S1) and overall I’m stronger now than I was in my early 20s. As for my cardiovascular condition, I have reached a totally new level of endurance.

It started when I ran in the New Year’s Eve 5K. 28 degrees and running in full sweats, I finished in 28:24--had to walk a bit after the 2.5 mile mark. Needless to say, I was a bit peeved. Since then, I have run in four more 5Ks, improving my time on every run. Last one was this past weekend where I finished in 22:02.

The importance of physical fitness in my life has changed.

Mentally, I have had to deal with a lot, both professionally and personally. Being deployed in a combat environment, you quickly come to grips with the fact you have no control over what happens.

Professionally, all you can do is roll with the punches and react according to training and quick wits.

Personally, you realize you can do very little about decisions made or events that happen 10,000 miles away. I have had to fight daily to deal with the mission at hand along with the feeling of helplessness as life back home continued to change.

Mentally, my focus on the important things in life has changed.

This morning also brought me back to a conversation I had with a friend last week over a cup of coffee. She told me when she left home her life was one way. Now when she returns in a couple months, it will be very different.

I feel the same way.

So, what has changed in my life over the past 6 months?

That is what the Army calls it. In simplest terms, train your replacements, hand over the reins and fade away.

The RIP started back on 13 Apr. A very long and drawn out process (no it's not suppose to take this long, but being an Air Force unit executing an Army mission, it's hard to convince "Green" that "Blue" knows what to do). The TOA took place today. No formal ceremony, no formations, no speeches (thankfully). Simply woke up this morning, handed the new guy the cell phone and went to the gym instead of the office.

My job now is purely and advisory role. Absolutely no authority whatsoever. My only responsibility; ensure my Airmen stay out of trouble until we board the "freedom bird" in 10 days. 10 very long days away!

I remember arriving in country 173 days ago. We took over for another AF team (the first to perform the law and order mission here). They did a great job laying the foundation. We had the opportunity to evolve the mission, refine tactics, techniques and procedures and build a hell of a reputation in the process.

For the past 5 months, my cops busted their tails to build an organization known for it's professionalism and performance. I could not be prouder of them and what they accomplished (and sacrificed).

On a daily basis they selflessly faced the best and worst of what a combat environment has to offer -- death (via explosions, gun shots, overdoses and suicides), assaults, illegal drugs, rocket attacks and the seemingly natural hatred for police in general.

And through it all, they performed magnificently. Accolades abound, we will hold a simple awards ceremony before we leave to formally acknowledge their accomplishments. As an
Air Force puke, I always get a kick out of seeing my Airmen recognized by the Army for a mission well done.

I can not say I'll miss this place, but I sure have learned a lot about leadership, myself and the true patriotic spirit of all the men and women who choose to volunteer to serve our Great Nation. 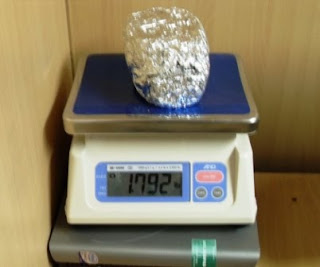 Drugs, both illegal and prescription abuse, are a problem here at Bagram.

We continually run into hashish, meth, steroids, cocaine, heroin and pain killers. With a large population of civilian contractors and local nationals, as well as new and inventive ways to hide them in mail, there seems to be an endless supply chain.

And demand is high (no pun intended).

Last week, this was sent through the mail in a care package. At 1.792 pounds, it was one of the largest finds we've had during our tour. In fact, this is the third such find in a span of 3 months.

Ironically, all 3 packages were addressed to me.

Yes, my mom sent another batch of her home-made fudge. It made a huge "thud" when we dropped it on the drug scale. This fudge is SO GOOD, my guys have dubbed it "Black Tar Heroin." One piece is never enough ...

We are always thankful when she sends some. We're even more thankful when it's gone. Raises hell on a diet, but cheating has never tasted so good.

THANKS MOM! You're the greatest.

My job here in Afghanistan, in the grand scheme of things, is not very dangerous.

In the simplest terms, I run a military police department in charge of law and order for a base population of over 32,000 US/Coalition forces, DoD employees, civilian contractors and third world country/local nationals who work and live on base.

My team's job is to ensure the safe and secure environment for all other forces who's job is to go out and prosecute the war here in northeast Afghanistan.

Just like any civilian police department, we deal with all sorts of violent crimes (murders/sexual assaults), suicides, illegal drugs, assaults, drunk and disorderlies, vehicle accidents and all the petty little things that pop up on a daily basis. Throw in post-rocket attack operations and distinguished visitor security details and you begin to see the full scope of responsibilities we have.

As Bagram's Provost Marshal (think chief of police), I work for Combined Joint Task Force 82 (82d Airborne Division), charged with all law and order operations in Afghanistan. Unique for two reasons. First, my entire team is comprised of Air Force cops working directly for the Army. Second, being stationed at the same location as the 82d ABN DIV Headquarters element, I have had a unique opportunity to travel to all the law and order dets around the country to evaluate their operations and train them on the ever-changing tactics, techniques and procedures.

These missions have allowed me to see a lot of this country and provided several unique experiences, many of which I have documented in this blog.

On my very first mission back in Nov 09, I decided to take a picture of my daughter--one I had pinned to the wall of my living quarters--with me. I have carried it on me ever since.

In fact, it is one of two pictures I have on me at all times.

On every mission, I have found an opportunity to pose while holding Jenna's picture. To date, she has flown on fixed-wing aircraft over the Hindu Kush mountains, on helicopters skimming the terrain, been a part of several intra city convoys in the country's capital and responded to countless law enforcement situations. Jenna has been to Jalalabad (x3), Kabul (x2), Kandahar, Zareh Sharan, Khowst (just off the boarder of Pakistan), Pol-e 'Alam and of course Bagram.

Below is a collage of our best pictures. The coolest; top left, a hybrid pic (had to take two, then morph due to low lighing) taken in front of Air Force One at Bagram. 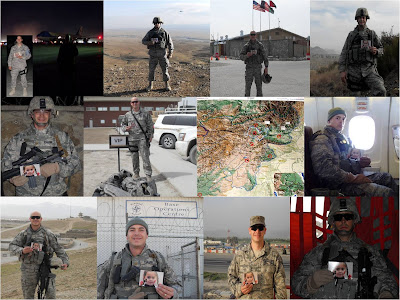 Flat Stanley Has Nothing On Jenna 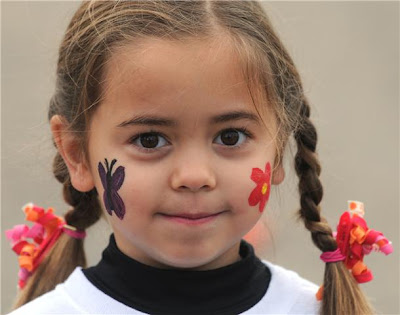 Went on my 8th mission the other day. It was significant for two reasons: 1) it was my last mission outside of Bagram; and 2) when I returned, my replacement was here. Oh happy days!

Like all the other missions I went on, this one had a couple of special moments.

We flew via CH-47 helicopters in a 2-ship formation to Pol-e 'Alam, south of Kabul. The ride was a blast, lasting just over two hours and taking us on a race track route to four other operating bases before we reached Forward Operating Base Shank.

Changing altitudes and directions at random intervals, we were able to avoid any ground fire from the little mountain men below. Our special passenger had a great time; a beautiful black Labrador, part of a military working dog team. If dogs love sticking their heads out car windows, sticking their head out the back of a helo flying about 1,000ft off the deck must have been pure heaven.

Pol-e 'Alam is 7,000ft up; a mere 500ft higher than Bagram. I was not expecting to experience any problems with regard to maneuvering in full gear at this slightly higher altitude. I was wrong.

One of the first places we visited was the highest point on Shank to get an overview of the entire base. From the bottom of the hill, it looked like an easy climb; only 45 sandbag steps to the top. We hit it at a quick pace reaching the top in not time. Only problem was in full kit (over 80lbs of gear--body armor, weapons and ammo) I was completely winded once we reached the top. I thought I was in pretty good shape; I was proven wrong. I developed a new found respect for all the Soldiers, Marines and Afghans who fight in the mountains at these higher altitudes daily.

Our mission went off without a hitch, even completing our objectives early. The bonus came when we found an Afghan bakery on post. Flat bread and hot tea. Nothing beats it around here.

Upon return to Bagram a couple days later, I met my replacement. The end is near :) 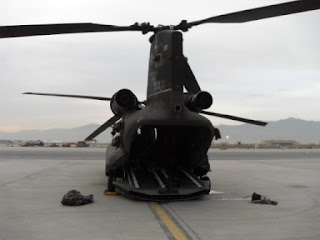 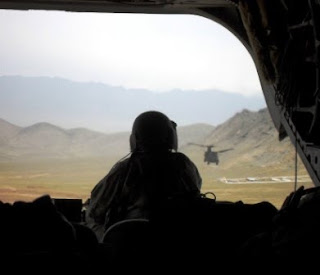 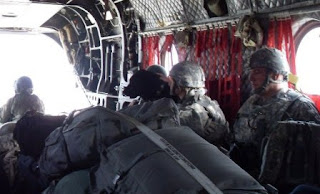 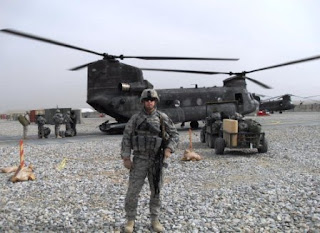 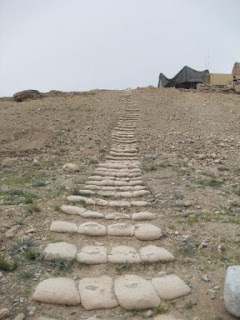 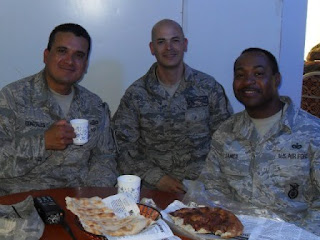 Always time for Afghan flat bread and tea. The flat bread is to die for!
Posted by Russ at 11:20 1 comment:

With the beginning of April comes the down hill slide of my team's deployment.

If April goes like March, it's gonna be quite a challenge ... 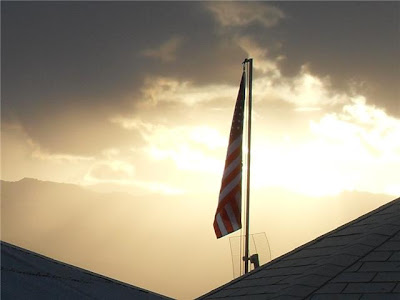