Over the past month, we have tried to carry out a mission to Jalalabad, only to have it scrubbed time and time again for various reasons.

Finally, after three failed attempts, we were able to execute.

Now I don't know about you, but the words, "It's gonna be a bumpy one" are not the first words I want to hear out of the aircrew's mouth as soon as I take my seat. Not only did he place emphasis on this, he repeated it no less than four times before we took off, even adding "if anyone needs an air sick bag I have some up front." For whatever reason, I immediately started singing "La Bamba" in my head ...

Outside of a few sudden drops in altitude (harking vivid memories of Disney World's Tower of Terror and Jenna screaming "I'm not liking this!") and the plane briefly flying sideways now and again due to sudden wind shears, it was not that bad of a flight.

The mission went well. On this particular one, I had one of my younger Airmen with me so he could get some experience. Being young, he was easily baited into helping out the kennel master conduct some K9 training. Having been responsible for my share of military working dog programs, I know (and have personally experienced) how sadistic kennel masters can be. In fact, I have conned my share of high-ranking officers to don the bite suit for a little "fun." In the end, my Airman took it well and now has some cool experiences to share with family and friends.

This mission was special for a couple of reasons. First, it was my last trip back to Jalalabad. Second, it was my last flight on a Blackwater Aviation STOL aircraft. After 15 flights, always sitting in the same emergency row (seat 4A), I was ready to say good ridden. So, goodbye tail number N150RN. I never felt safe flying in you and you never failed to give me new and interesting mechanical noises to ponder as we flew over the Hindu Kush. 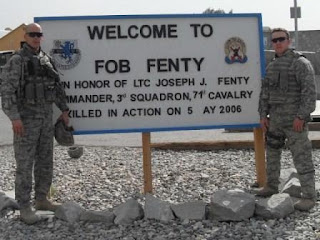 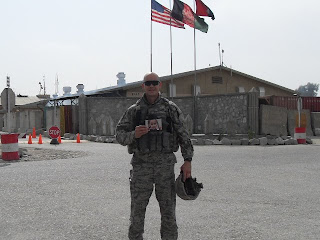 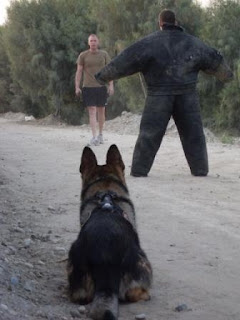 Sizing up his new toy 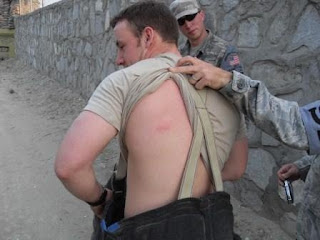 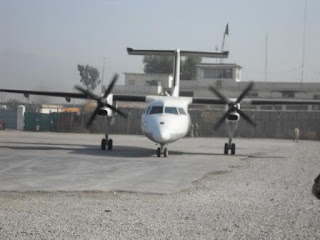 Labels: Back to Jalalabad

Pictures to accompany my last post (in chronological order). 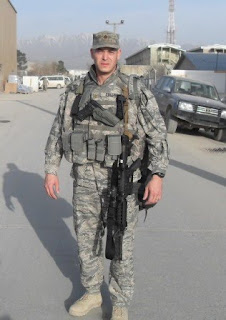 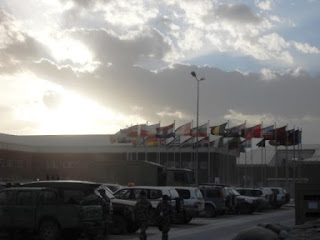 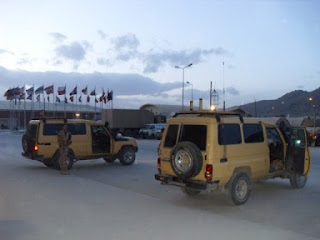 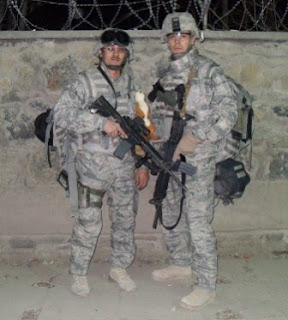 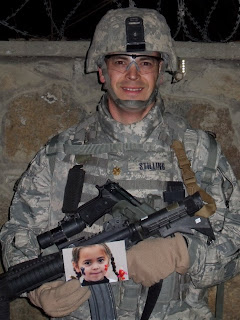 J on patrol with me 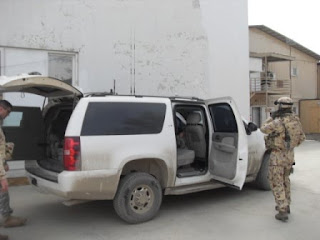 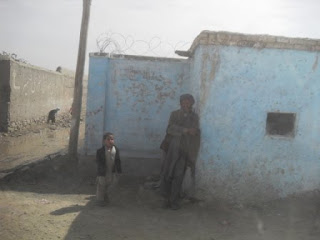 Lost in the village 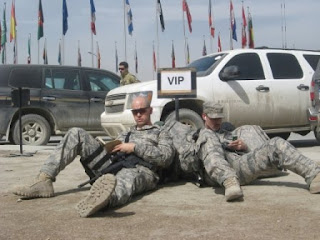 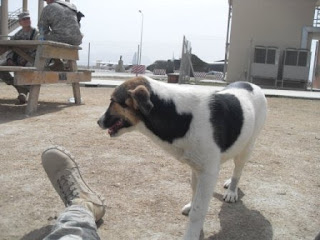 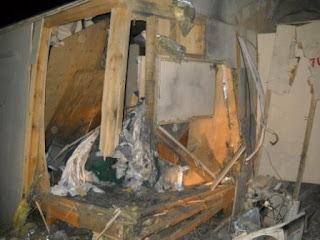 Rocket impact site
Posted by Russ at 11:24 No comments:

This past weekend was without a doubt the longest and most tasking (mentally, physically and emotionally) since I’ve been in country. Thanks to my strong faith in God and the support of family, close friends and comrades, I made it through and continue press forward.

It started with an unusual mission to Kabul. It was suppose to be a quick in and out training mission. While we got the training done, there were a few surprises waiting for us. These provided a new sense of adrenaline rush and fear I had not experienced before.

First one came when the regular US convoy we were going to catch from Kabul Int to our destination was cancelled. Luck intervened when we were able to attach ourselves to a British convoy heading to ISAF HQ—close to where we needed to go. Like most intra-city convoys, it was in armored SUVs. The British were professional to say the least and once we received the mission brief (what to do if attacked, local threats, etc.), we were ready to roll. By this time it was dark, around 6PM.

Difference between a day-time and night-time convoy is obvious—you can’t see very well at night. Your senses go into over-drive as you adjust to this limitation. One of the threats, don’t laugh, was a DBIED (donkey borne improvised explosive device).

Off we went, speeding through Kabul; our trail vehicle performing an impromptu ballet swerving back and forth at distances ranging from 30 feet to less than a foot behind us, keeping the constant flow of Afghan vehicles from passing us. Good tactic if you’re moving; useless when you’re in a traffic jam. Sure enough, a donkey cart passed us while we were stuck. A few tense moments later, we were moving again. Plowing through the streets at varying speeds we finally reached our destination. After sitting in the middle of a busy road waiting for about five nerve-racking minutes, the huge gates to the compound finally opened. Drive time, 50 minutes.

Now we had to get to our final destination, a compound about a mile away. Our only choice, a foot-patrol.

We pushed off into the dimly lit streets of Kabul. Shortly after leaving the safe confines of HQ, a group of local kids joined us. “I your body guard” one kid says and takes up position on my left. The others swarmed like bees around our formation, asking for money and whatever gear we would give them. Outside of the fear of the unknown, the mile went by quickly and we arrived at our destination safely.

My "body guard," who was very efficient at keeping the others away from my gear (or so I thought), finally whispers to me, “you have one dollar, just one dollar?” I told him no. His response, “maybe tomorrow.” Yeah right kid, maybe tomorrow. It was not until later during an equipment check did I realize the little swarm managed to steal one of my carabineers used to attach my helmet when not worn. Have no idea how they got it seeing as I’m 6ft and they were maybe 4ft max. It was secured near the top of my back body armor plate by my neck. Damn, those kids were good.

The next morning we had to get back to Kabul Int, and again all US convoys were cancelled. So this time we joined an Australian team heading there to drop off supplies. Same type of mission brief as the day before and we were off. This time in the lead vehicle. One thing that sucks about armored vehicles is they are so heavy, the shocks wear out quickly. Found this out the hard way when we hit the first of many pot-holes, slamming my head up into the roof. Thank goodness for helmets. When all was said and done, no fewer than a half dozen helmet checks occurred. Don’t ask about seatbelts.

Mid morning traffic was not bad so we reached our target gate in about 10 minutes. Problem was the Afghan police had closed it. Acting quickly the convoy commander chose a small side road leading into a nearby village. Imagine driving through narrow streets (about 12ft wide) in large SUVs never meant to fit on these roads, at break neck speeds to minimize chances of becoming easy targets. Helmet check. In such close confines, our heads were constantly on a swivel, looking for threats on roof tops, in the streets and alley ways. Adrenaline quickly takes over.

Now it’s never good when the two phrases you hear frequently are “F#ck Mate, that was close” and “I hope there’s a left turn around here somewhere.” We got lost twice and had to double back. Not good in Indian country. Finally we caught a glimpse of the airport perimeter through a break in the buildings and snaked our way back to safety. Once we dismounted, I overheard the convoy commander say “when I see so and so, I’m gonna punch him in the face for suggesting that route” (colorful language deleted). Travel time, 40 exhausting minutes.

After waiting around for 7 hours and enduring a rocket attack on the airport, we finally got on a C-130 and returned home.

That night, I received some devastating news. God and friends are helping me through that one.

Early the next morning, the base was hit by a salvo of rockets. One tragically found its mark. We responded to find one corner of a living quarters destroyed. Inside was an unfortunate soul who happened to be sleeping in his bed when the rocket hit less than two feet away. Our job was to search and secure the scene for the experts to come out and do their thing. Took about an hour. Then the body was removed. Yet another image burned in my memory. Found out later he was due to go home soon and get married.

I experienced all the above in a time span of 48hrs.

My reality check? This is a dangerous place where things often change on you in an instant and you better be ready for it. You surrender all control. You trust in God. 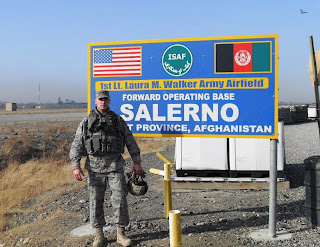 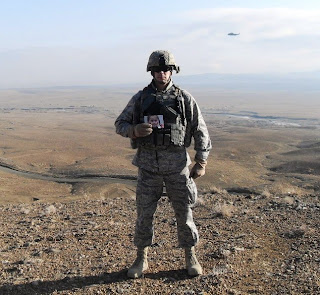 Pakistan in the background 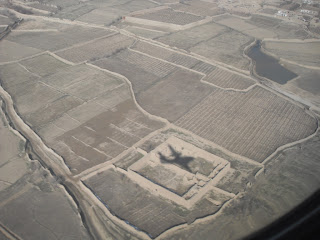 Heading back to BAF 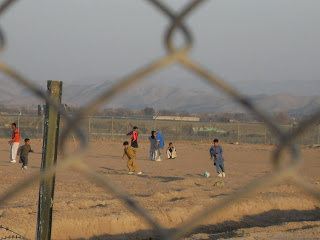 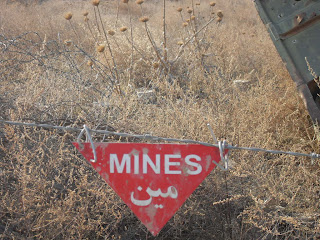 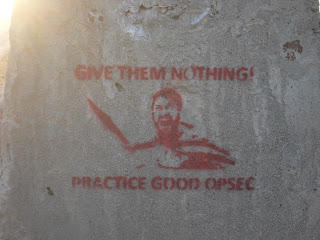